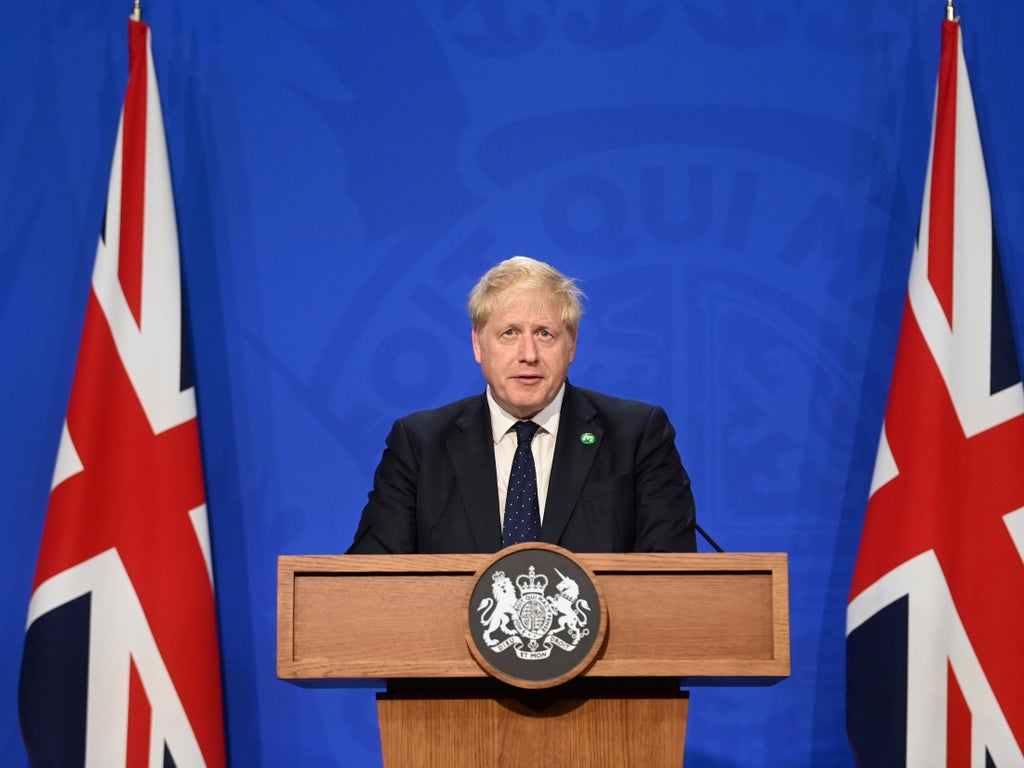 Boris Johnson is due to hold a press conference this week on his plans for tackling Covid-19 this winter, the first time he has given an update on the pandemic since relinquishing the last social restrictions imposed on the public on 19 July.

The prime minister is expected to take to the podium on Tuesday to lay out his plans for managing the likely surge in coronavirus cases this autumn and winter and to say he is “dead set” against implementing further lockdowns now that a majority of the British public have been vaccinated against the disease.

His stance was trailed by a senior government source, who told The Daily Telegraph: “This is the new normal. We need to learn to live with Covid. The vaccines are a wall of defence. The autumn and the winter do offer some uncertainty, but the prime minister is dead set against another lockdown.”

The i newspaper reported last week that the government had drawn up plans for a “firebreak” lockdown in October but a Downing Street spokesperson insisted that the measure was simply “a last resort”.

Mr Johnson is expected to repeat that message and may also commit to repealing some of the powers handed to him by MPs in the Coronavirus Act (2020), approved on 25 March 2020 at the outset of the global pandemic, including those allowing him to shutter the economy and impose restrictions on gatherings.

Reports indicate that the traffic light system regulating international travel could also be scrapped, in addition to requirements for fully-vaccinated British arrivals to pay for PCR tests.

But it is thought the government could reintroduce restrictions regarding face masks and reissue work-from-home advice in the event that infections surge with the arrival of winter flu season.

Some decisions still need to be made relating to vaccines, with a final verdict on booster jabs due from the Joint Committee on Immunisation and Vaccination (JCVI) after interim advice from that body proposed planning for the most vulnerable to be offered further shots from late September.

The government could also unveil plans to begin vaccinating 12-15 year-olds, with The Observer reporting on Sunday that schools have been warned to begin implementing a programme within weeks and perhaps as soon as 22 September.

The latest official data on Covid added a further 29,713 cases and 56 deaths from the virus on Sunday, part of a steady and ongoing rise since the summer lull seen in late June.

Since the pandemic began, 134,200 British people have died within 28 days of testing positive while the number with coronavirus mentioned on their death certificate is even higher, at 158,000, according to the Office of National Statistics.

Experts have warned that the current pace of admissions to hospital with Covid is increasing at an “alarming rate” – putting additional pressure on the NHS as it struggles to cope with demand for emergency care and millions waiting for treatment.

“The winter months will bring renewed challenges,” the government said in a statement anticipating the prime minister’s address.

“Covid will circulate alongside flu and other respiratory viruses and the threat of a new variant remains. It is difficult to predict with certainty how these will interact and what pressure they may place on the NHS.”

Mr Johnson’s latest remarks on the virus come as Labour urges his administration “to get a grip before winter”, describing health secretary Sajid Javid’s dramatic announcement on Sunday that the government had dropped its plans for domestic vaccine passports for use in nightclubs and other crowded venues, which the opposition called “the culmination of a summer of chaos from ministers”.

Speaking on Sky News on Monday morning, work and pensions secretary Therese Coffey appeared to qualify Mr Javid’s words somewhat when she said: “When we had a variety of regulations we said we’d go back to parliament every six months to see if those regulations were still necessary, but also some of the ideas that we wanted to consider, and are still part of the toolbox, like vaccine passports.

“Again we said we were considering bringing these items in but it’s important that we look at exactly what benefits that will bring, and right now the health secretary indicated – although we haven’t made a formal decision – that he does not think it is necessary for the vaccine passports to be introduced by the end of the month.

“But the prime minister will be setting out tomorrow a lot more of the detail of the road map ahead, preparing for winter.”

Also appearing on BBC Breakfast, Ms Coffey indicated that working from home orders and rules on safeguarding sick pay for those forced to isolate because of the virus could stay.

“These are the sensible measures I think that we’re going to keep,” she said, subsequently declining to be drawn on new mask rules.