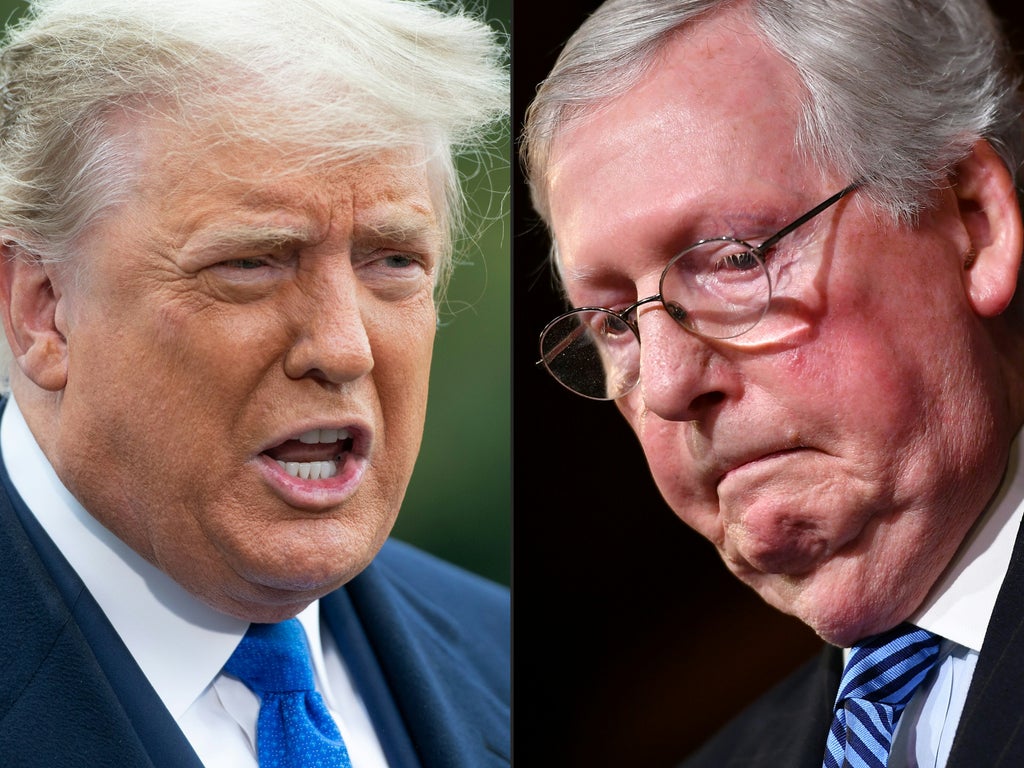 Mr McConnell urged the then-attorney general to publicly speak out at the end of 2020 as he feared Mr Trump was damaging the GOP’s hopes in the Senate runoff election in Georgia, according to a forthcoming book.

Now the one-term president has hit out at the Senate minority leader in a new statement.

“Had Mitch McConnell fought for the Presidency like he should have, there would right now be Presidential Vetoes on all of the phased Legislation that he has proved to be incapable of stopping,” said Mr Trump in a statement.

“Not to mention, he lost two Senatorial seats in Georgia, making the Republicans the minority in the Senate.

“He never fought for the White House and blew it for the Country. Too bad I backed him in Kentucky, he would have been primaried and lost!

“Based on press reports, he convinced his buddy, Bill Barr, to get the corrupt (based on massive amounts of evidence that the Fake News refuses to mention!) election done, over with, and sealed for Biden, ASAP!”

The claims were made in interviews for journalist Jonathan Karl’s book Betrayal, which is about the final days of the Trump administration.

“Look, we need the president in Georgia,” Mr McConnell told Mr Barr, according to interviews for the book, “and so we cannot be frontally attacking him right now. But you’re in a better position to inject some reality into this situation. You are really the only one who can do it.”

Neither Mr McConnell not Mr Barr reportedly believed Mr Trump’s wild and debunked claims about having the election stolen from him.

“My attitude was: It was put-up or shut-up time,” Mr Barr told Karl for the book.

“If there was evidence of fraud, I had no motive to suppress it. But my suspicion all the way along was that there was nothing there. It was all bulls***.”

In December 2020 Mr Barr went against Mr Trump’s claims, telling the Associated Press: “To date, we have not seen fraud on a scale that could have effected a different outcome in the election.”

In the end both Republican candidates lost their seats in historic upsets, with defeats to Jon Ossoff and Raphael Warnock, which tied the US Senate at 50-50 and gave vice president Kamala Harris the deciding vote to break all ties.