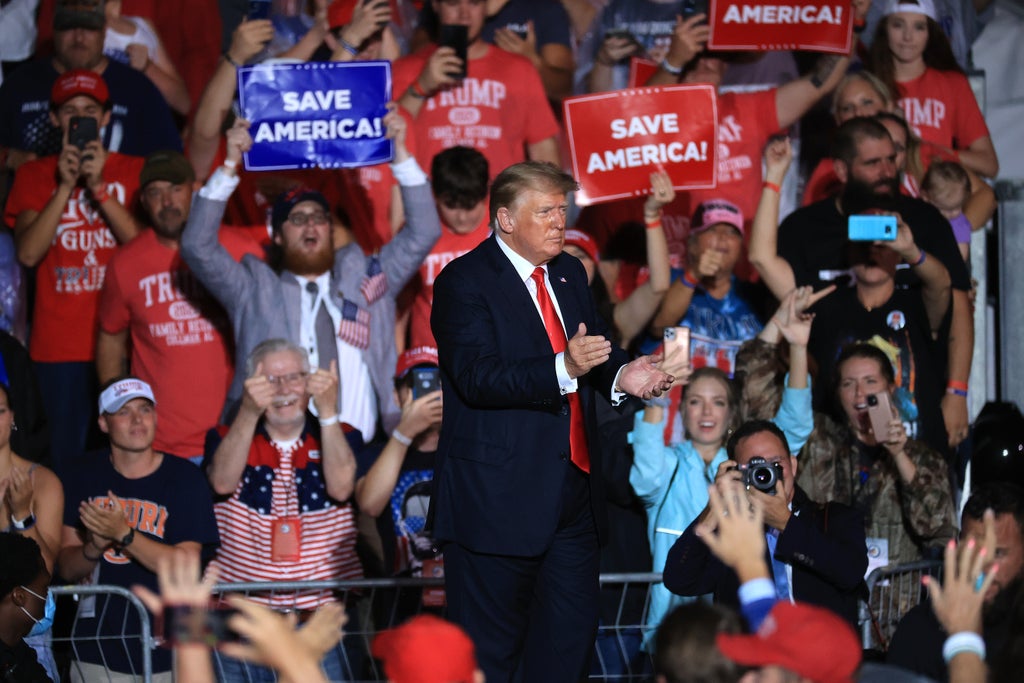 Robert E Lee was a “genius” who could have led America to victory in Afghanistan, Donald Trump has said, decrying the decision by Virginia to remove the “magnificent” statue of the Confederate general.

“Just watched as a massive crane took down the magnificent and very famous statue of ‘Robert E Lee On His Horse’ in Richmond, Virginia. It has long been recognised as a beautiful piece of bronze sculpture,” said a lengthy statement issued by Mr Trump on Wednesday.

“To add insult to injury, those who support this ‘taking’ now plan to cut it into three pieces, and throw this work of art into storage prior to its complete desecration,” he added.

The removal of Lee’s statue from Richmond, Virginia, marked a watershed moment in the latest push to remove the statues of slaveholders and Confederate figures from public view, following a summer of racial justice protests in 2020 and a wave of statue removals across the US.

The capital city’s streets, best known for its icons of white power, no longer feature any.

Mr Trump in his statement, however, dubbed Lee as the “greatest strategist of them all.”

“President Lincoln wanted him to command the North, in which case the war would have been over in one day. Robert E Lee instead chose the other side because of his great love of Virginia, and except for Gettysburg, would have won the war,” he said.

“He should be remembered as perhaps the greatest unifying force after the war was over, ardent in his resolve to bring the North and South together through many means of reconciliation and imploring his soldiers to do their duty in becoming good citizens of this country.”

The former president also added: “Our culture is being destroyed and our history and heritage, both good and bad, are being extinguished by the Radical Left, and we can’t let that happen!”

Virginia’s governor Ralph Northam had announced plans to remove the statue, which was the largest, still-standing Confederate statue in the country, on 4 June 2020.

The state’s Supreme Court sided with the decision after it was challenged in court, paving the way for construction crews in cherry-pickers to lift the statue from its pedestal.

Mr Northam, who was among the crowd of people watching the statue come down, welcomed the move and said the “public monuments reflect the story we choose to tell about who we are as a people”.

“It is time to display history as history, and use the public memorials to honour the full and inclusive truth of who we are today and in the future,” he said.

In his statement, Mr Trump also pivoted to the US’s disastrous exist from Afghanistan and claimed that if Lee held command, the Afghan war would have ended sooner and differently.

“If only we had Robert E Lee to command our troops in Afghanistan, that disaster would have ended in a complete and total victory many years ago. What an embarrassment we are suffering because we don’t have the genius of a Robert E Lee!”

This is not the first time that Mr Trump has lavished praises on Lee, who was known to have kept Black people as slaves, according to many historians, including John Reeves who wrote a book on him.

Earlier in 2019, Mr Trump, who was the president at the time, had called Lee, a “great general”.

“Whether you like it or not, he was one of the great generals. I have spoken to many generals here, right at the White House, and many people thought – of the generals, they think that he was maybe their favorite general,” Mr Trump had said of the Confederate military leader.

He made these remarks while trying to defend a statement he made in 2017 terming white nationalist violence in Charlottesville as “people that were very fine people on both sides.”

Earlier this summer, another Lee statue in Charlottesville, the centre of the infamous 2017 “Unite the Right”white supremacist and neo-Nazi rally, was also removed.