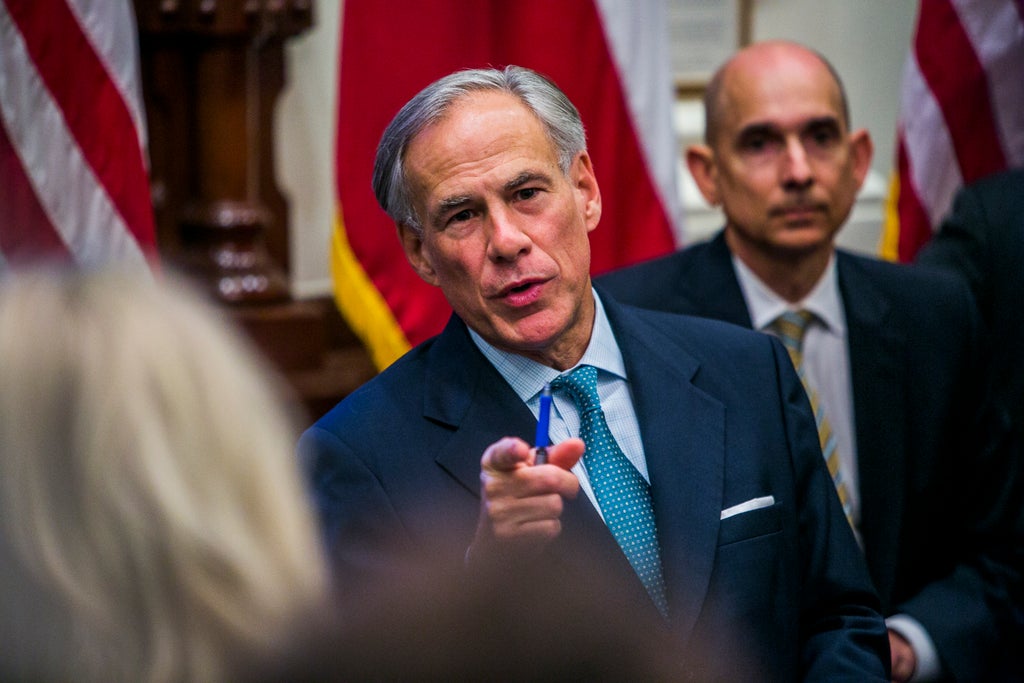 Greg Abbott has defended new abortion laws in Texas by saying victims of rape and incest will have “at least six weeks” to terminate their pregnancy.

The Texas Governor was asked why he was forcing a rape or incest victim to carry their child to term on Tuesday.

“It doesn’t require that at all, because obviously it provides at least six weeks for a person to be able to get an abortion,” he replied.

Reporter: Why force a rape or incest victim to carry a pregnancy to term?

Gov. Greg Abbott (R-TX): “It doesn’t require that at all, because obviously it provides at least 6 weeks for a person to be able to get an abortion.” pic.twitter.com/Mbx5JVHG1D

Mr Abbott was blasted on social media for the comments, with many pointing out that most women don’t know that they’re pregnant at six weeks.

Another person said: “Your complete lack of compassion (and, in fact, active hatred) for the experiences of survivors and all people who need abortions is so sickening.”

Many women don’t even know they’re pregnant by the 6-week mark when abortion is outlawed in this bill.

Rape and incest victims would be forced to carry a pregnancy to term at that point—or face civil lawsuits for getting an abortion. https://t.co/wyHmk1wcLU

The new law bans all abortions after detection of cardiac activity, which usually emerges after around six weeks of pregnancy.

Under the legislation, private citizens are essentially deputised with the promise of $10,000 bounties to file lawsuits against anyone accused of aiding or abetting the practice of an abortion after six weeks, other than the patient themselves.

Clinics offering abortions in Texas have already started turning patients away and around 7 million women in Texas are thought to be at risk of losing access to legal and safe abortions.

Mr Abbott was asked about the new abortion bill while signing a sweeping set of voting restrictions that would roll back early voting options and mail-in ballot access across the state.

“Let’s make something very clear, rape is a crime,” he added.

“And Texas will work tirelessly to make sure that we eliminate all rapists from the streets of Texas by aggressively going out and arresting them and getting them off the streets.”

Last week, the US Supreme Court decided by a 5-4 margin, not to act against the Texas law and allow it to go into effect even though it goes against the precedent of Roe v Wade from 1973.

This was despite the strenuous objections of the court’s three liberal justices, who were joined by Chief Justice John Roberts in dissenting.

“Presented with an application to enjoin a flagrantly unconstitutional law engineered to prohibit women from exercising their constitutional rights and evade judicial scrutiny, a majority of Justices have opted to bury their heads in the sand,” she wrote.

Mr Abbott’s approval rating sunk to its lowest rating since his 2014 election this week, according to a survey from The Texas Policy Project at the University of Texas at Austin.

It found just 42 per cent of Texans approve of the direction the state is going in, while 52 per cent said the state was on the wrong path, the worst figure recorded by the institute since it started in 2008.

Meanwhile, former President Donald Trump dodged questions about whether he would support the new law, and instead renewed his attacks on the Supreme Court.

In an interview with Sinclair Broadcasting Group, Mr Trump said he was studying the law and had great confidence in Mr Abbott.

When asked about the role justices Neil Gorsuch, Brett Kavanaugh and Amy Coney Barrett played in declining to act against the law, he said: “We do have a Supreme Court that’s a lot different than it was before, it was acting very strangely. And I think, probably not in the interests of our country.”