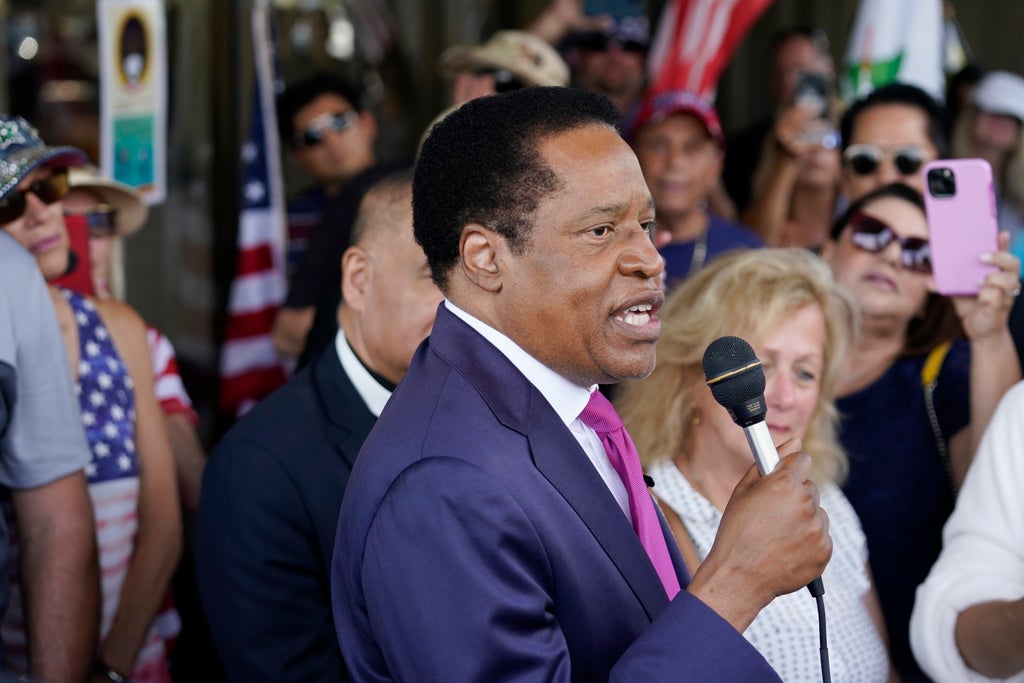 Larry Elder, the leading Republican candidate in the race to recall Democratic California governor Gavin Newsom, told a crowd on Tuesday that systemic racist is a “lie.” His own success as a Black man, he argued in remarks in Clovis, California, was proof of it.

“Say hello to the Black face of white supremacy,” Mr Elder, a syndicated host of conservative radio programmes for decades, said. “Systemic racism, it’s a lie. The police are not engaging in systemic racism against Black people. If anything, the studies show the police are more hesitant, more reluctant, to pull the trigger on a Black suspect than a white suspect.”

These claims are factually incorrect. Studies consistently find that police kill Black people at disproportionate rates compared other groups, and that years of intentional systemic discrimination have produced unequal outcomes for minority groups in nearly every aspect of life, including wealth and healthcare access.

These disparities have been especially pointed during the coronavirus pandemic. Last year, Black Americans were more than twice as likely to die of Covid as white ones

The Independent has reached out to Mr Elder’s campaign for comment.

Larry Elder, who sometimes calls himself the “sage of South Central,” grew up in Los Angeles, and has been a fixture on conservative radio programmes for years, as well as more recent turns on Fox News. Despite entering the recall race after some of his numerous GOP competitors, the small government libertarian is the clear front runner, polling with roughly 24.2 per cent of the vote, 12 per cent higher than his nearest rival, according to FiveThirtyEight.

Though he himself attended the Ivy League Brown University on affirmative action, he has criticised such programmes, as well as numerous other liberal priorities, including gender parity, environmental protection, social services for undocumented migrants, and government welfare. Governor Newsom has called Mr Elder “more extreme than Trump.”

His views on these matters date back decades. A CNN investigation found that in a 1996 ad for his radio show, he doubted the existence of the glass ceiling and said “women exaggerate the problem of sexism,” while also claiming that “Blacks exaggerate the significance of racism.”

He has also criticised the 1994 Violence Against Women Act as a way to “redistribute power from the ruling class (men) to the oppressed class (women),” and more recently mocked those who attended the massive 2017 Women’s March in Washington DC as obese.

“When you look at all these women that have marched — something like 2 million women — Donald Trump has probably gotten more obese women off the couch and in the streets, working out, than Michelle Obama did in eight years,” he said on an episode of his show.

His candidacy has proved controversial in other ways as well. He has told listeners that Joe Biden didn’t win the 2020 election, and conflict of interest disclosure paperwork revealed he was paid in part by the Epoch Times, a media company accused of spreading misinformation and conspiracy theories.

A former girlfriend has also accused Mr Elder of pointing a gun at her while high on marijuana during a 2015 breakup, which he denies.

“We were having a conversation and he walked to the drawer and took out a .45 and checked to see that it was loaded,” Alexandra Datig has said. “He wanted me to know he was ready to be very threatening to me. He’s a talented entertainer, but he shouldn’t be governor.”

Mr Elder has said he “never brandished a gun at anyone” and that he wouldn’t “dignify [the allegations] with a response.”