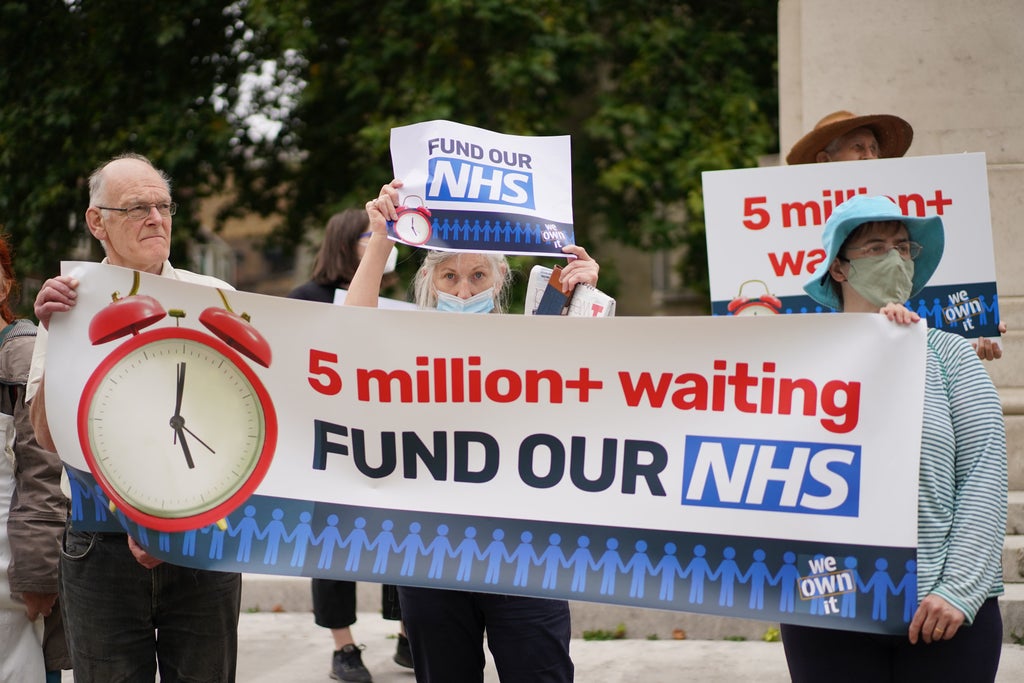 The number of people waiting for routine hospital treatment in England has risen to a new record high, the latest NHS figures show.

Some 5.6 million people had yet to start treatment at the end of July – the highest number since records began in August 2007.

Funds raised by the new health and social care tax, announced this week, will help the NHS to work through this patient backlog – but politicians have warned that the waiting list will only “get worse before it gets better”, as the UK struggles with the fallout from the Covid-19 pandemic.

Health secretary Sajid Javid has said he was told the NHS waiting list could reach 13 million without immediate action.

NHS England said many more tests and treatments have been delivered this summer compared to last, while hospitals cared for thousands more patients with Covid.

It said there were 3.9 million diagnostic tests and 2.6 million patients started consultant-led treatment in June and July, compared with 2.7 million tests and 1.6 million treatments over the same time last year.

NHS England also pointed to data showing that almost half a million people were checked for cancer in June and July, among the highest numbers on record.

The number of people starting treatment for cancer in July 2021 was also higher than the pre-pandemic average, however it was slightly lower than the previous month – and the total number since the start of the pandemic is still more than 33,000 lower than expected.

Analysis from the charity Macmillan estimates the NHS in England would need to work at 110 per cent capacity for 17 months to catch up on missing cancer diagnoses, and for 13 months to clear the cancer treatment backlog.

Professor Stephen Powis, national medical director for NHS England, said: “NHS staff have pulled out all the stops to deliver millions more tests, checks, treatments and operations than they did last summer despite caring for many more Covid patients.

“Caring for 450,000 patients with the virus has inevitably had a knock-on effect on less urgent care and left a backlog but staff are working around the clock to make the best possible use of government investment to treat as many people as possible.

“We do not know how many of those who held back from accessing care during the pandemic still need treatment, but we expect more to come forward in the coming months.”

Siva Anandaciva, chief analyst at The King’s Fund, said that all NHS services have been affected by the growing patient waiting list, with primary care, hospital care and mental health services seeing the demand for care rise as the immediate threat of Covid-19 recedes.

“Even before Covid-19, waiting lists for treatment had substantially worsened,” she added. “The significant investment the government has now promised is very welcome but will not lead to an increase the number of hospital beds or clinical staff overnight.”

The new data showed that more than 325,000 patients in England had been waiting more than six weeks for a key diagnostic test in July.

A total of 325,229 patients were waiting for one of 15 standard tests, including an MRI scan, non-obstetric ultrasound or gastroscopy.