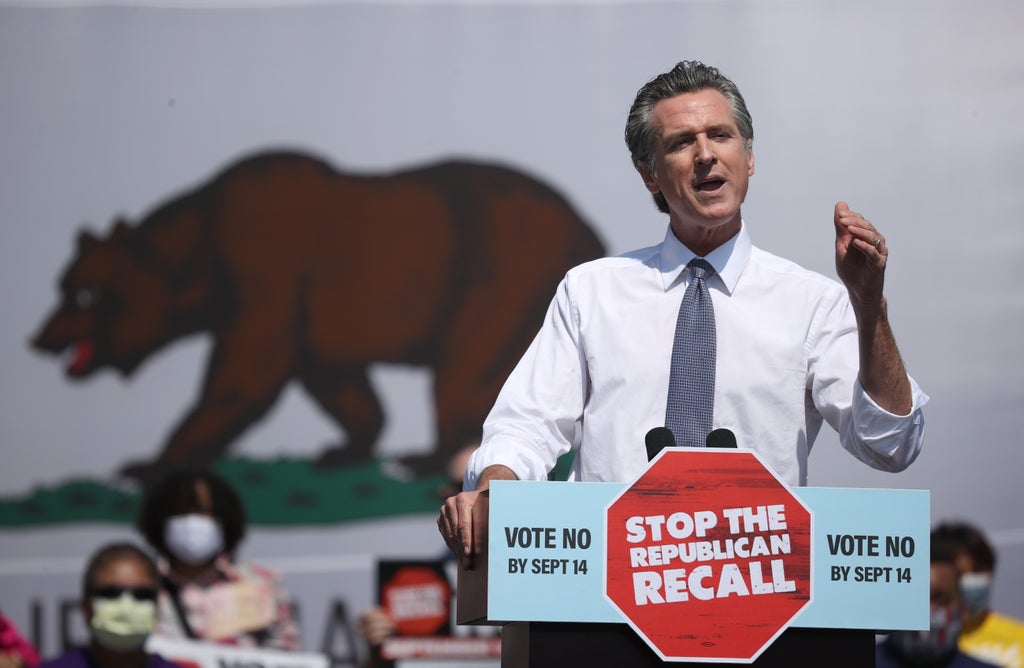 Gavin Newsom should easily hang on to his job as governor in the state’s recall election, a new poll suggests.

The UC Berkeley Institute of Governmental Studies poll shows that 60.1 per cent of likely voters oppose the recall, with 38.5 per cent in favor of Mr Newsom losing his job.

Just 2 per cent of voters were undecided or declined to answer the poll, which was conducted between 20 August and 6 September and made public on Friday.

It is the latest in a string of polls over the last six weeks that suggest Mr Newsom’s campaign has gathered momentum across the state ahead of the 14 September election day.

A Berkeley poll on 27 July had voters evenly split, but Mr Newsom appears to have established a strong position days ahead of Tuesday’s final voting opportunity.

Conservative radio host Larry Elder is the leading Republican running to replace Mr Newsom, and the poll director says this seems to have played a key role in the governor’s boost in support.

“In the early going it was probably more about whether they liked Newsom or not. It was personalised,” Mark DiCamillo told The Los Angeles Times.

“By attacking his challenger, which is Elder, and framing it as ‘Look at what you’ll get if you vote for this guy’ … I think that really won the day.”

The Republican-led campaign, which could remove Mr Newsom from office a year early, is taking place after 1.7m petition signatures were collected by his opponents and certified by state officials.

California is one of 20 states with a mechanism to recall a sitting governor and the last time the move was successful was in 2003, when Democratic governor Gray Davis was replaced by Hollywood star Arnold Schwarzenegger, who ran as a Republican.

The leading Republican in the race to take his job, conservative radio host Larry Elder, has pledged to reverse California’s mask and vaccination mandates if he wins.

Earlier this week Barack Obama urged Californians to back Mr Newsom in the state’s recall election, saying that the vote is about “protecting your kids”.

“California! You’ve got a big choice to make by September 14, and everything is on the line,” Mr Obama tweeted.

“Your vote could be the difference between protecting our kids or putting them at risk; helping Californians recover or taking us backwards. Vote “no” on the Republican recall.”