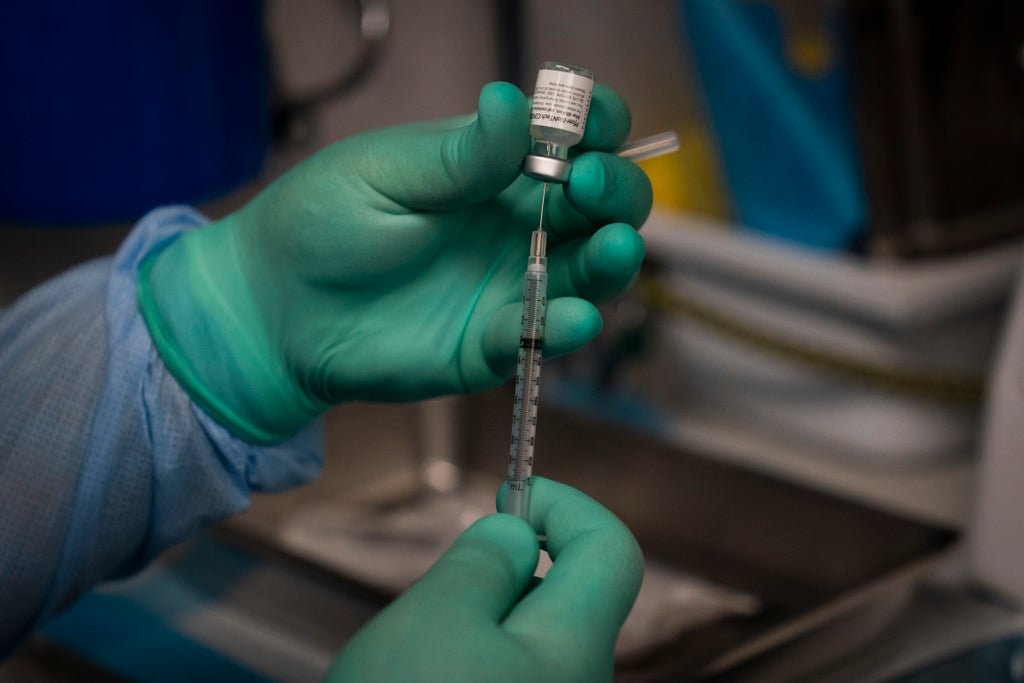 Most people do not need a third Covid booster jab, according to a new study.

Those already vaccinated continue to have such good protection against severe coronavirus infection, even with the more infectious Delta variant, that a top-up third dose is unnecessary.

That is the conclusion of a review by an international group of scientists assessing evidence from a series of trials and studies already published.

After averaging the results reported from several observational studies, vaccination provided 95 per cent efficacy against severe disease from either the Delta variant or earlier Alpha variant of Covid.

The jabs were also more than 80 per cent effective at protecting against any infection from these variants, the scientists found.

Vaccines are less effective against asymptomatic infection and transmitting the virus than at stopping people having severe cases, but the unvaccinated minority remain the major drivers of transmission as well as also being personally more at risk of falling seriously ill from Covid.

The government is reportedly on the cusp of announcing its booster vaccination programme, with its scientific advisors recommending offering a third jab to millions of fully vaccinated Britons from as early as later this month.

It is not yet clear if the boosters will only be available for the elderly and other groups most at risk, or if they will be rolled out more widely.

However, Dr Ana-Maria Henao-Restrepo from the World Health Organisation (WHO) and the lead author of the new review published in The Lancet, said the available evidence did not support the idea those already vaccinated had declining protection against severe infections.

“The limited supply of these vaccines will save the most lives if made available to people who are at appreciable risk of serious disease and have not yet received any vaccine,” she said.

“Even if some gain can ultimately be obtained from boosting, it will not outweigh the benefits of providing initial protection to the unvaccinated.

“If vaccines are deployed where they would do the most good, they could hasten the end of the pandemic by inhibiting further evolution of variants.”

This echoed the position of the head of the global vaccine-sharing initiative Covax, who said it would be “counter-productive” for the UK to roll out booster jabs to millions of Britons, arguing the country’s excess supplies would be put to better use in protecting people in poorer countries who remain unvaccinated.

The government has said the UK’s booster programme is “probably the most important piece of the jigsaw yet to fall into place” for ending the pandemic – yet Aurélia Nguyen, managing director of the Covax Facility, said a more “holistic” approach needed to be adopted in tackling Covid-19.

“The difference between giving a third dose to a healthy young adult or a first dose to an ICU worker or elderly or immunocompromised person in a developing country – clearly one has a higher benefit to it,” she told The Independent.

“I understand the drive to offer absolute maximum protection but actually it’s counter-productive [to administer third doses], in the sense that while the virus is still circulating and mutating across the world, then ultimately that’s going to affect the UK as well.”

The Lancet study’s authors also noted that even if antibody levels do wane in vaccinated people over time, this does not necessarily mean the efficacy of vaccines against severe disease will be reduced, as other immune response can still be triggered.

Co-author Dr Soumya Swaminathan, the WHO’s chief scientist, added: “The vaccines that are currently available are safe, effective, and save lives.

“Although the idea of further reducing the number of Covid-19 cases by enhancing immunity in vaccinated people is appealing, any decision to do so should be evidence-based and consider the benefits and risks for individuals and society.”