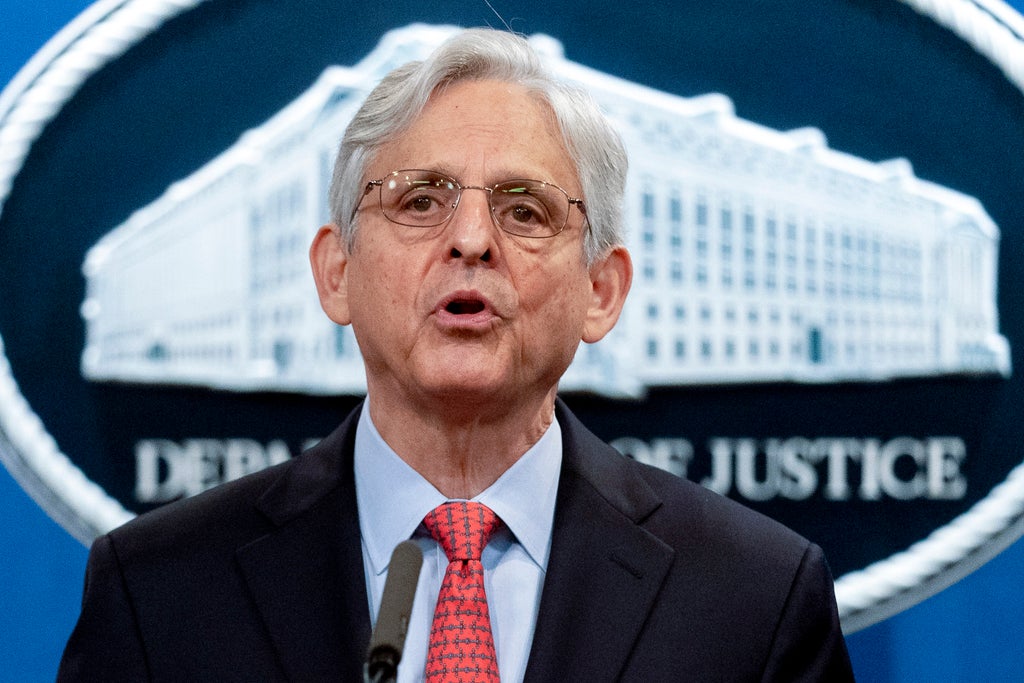 The move follows the decision by the Supreme Court’s conservative justices to stop the law from taking effect. Calling the act “clearly unconstitutional” at a press conference on Thursday afternoon, Mr Garland warned that GOP lawmakers’ efforts to construct the bill in a way that put the onus on private citizens to enforce the ban was a naked attempt to circumvent Supreme Court precedent and the US constitution.

If it was upheld, he argued, more states would use similar language to shield other attempts at nullifying rights guaranteed by the constitution in the future.

“This kind of scheme to nullify the constitution of the United States” is something that everyone “should fear”, regardless of their personal views on the issue of abortion rights, Mr Garland said.

The attorney general also attacked the basic merits of a six-week abortion ban, which he noted would prohibit the procedure “before many women even know they are pregnant, and months before a pregnancy is viable”.

“This leaves women in Texas unable to exercise their constitutional rights” which he said were established and guaranteed under “longstanding Supreme Court precedent”.

Democrats and activists around the nation have called for the Biden administration to take direct action to help women in Texas and abortion providers affected by the new ban, which has already caused some clinics in the state to stop offering the procedure altogether.

Most critics of the bill have correctly noted that six weeks is only a short time – typically one to two weeks – after a woman misses her first period of the pregnancy.

The Centers for Disease Control (CDC), which operates an “abortion surveillance” system, found that in 2018 just over one third (38.6 per cent) of abortions in the US were performed at or before nine weeks into gestation.

On Thursday, however, Mr Garland denied that the “pressure” instigated by activists and lawmakers had anything to do with the Justice Department’s decision to take action.

Texas’ governor Greg Abbott signed the Republican-led bill prohibiting abortions in the state after six weeks into the pregnancy in mid-May, and the law went into effect at the beginning of September.

Unlike previous GOP attempts to ban abortions after various amounts of time, the Texas law bars state officials from enforcing its provisions and instead deputises state residents to file lawsuits against those accused of aiding or abetting abortions after the six-week mark. The construction of the law was credited with the Supreme Court’s 5-4 decision to allow it to go into effect, though the ruling on the case’s merits is not final and could still be reversed. Chief Justice John Roberts joined with the court’s liberal wing in the decision.

State residents are offered rewards of up to $10,000 (£7,200) for taking legal actions against those involved in violating the new law, with the exception of the patient, a provision that Democrats and other critics have likened to “bounties” on abortion providers.

“It takes little imagination to discern Texas’s goal – to make it too risky for an abortion clinic to operate in the state, thereby preventing women throughout Texas from exercising their constitutional rights, while simultaneously thwarting judicial review. Thus far, the law has had its desired effect. To date, abortion providers have ceased providing services prohibited by SB 8, leaving women in Texas unacceptably and unconstitutionally deprived of abortion services,” wrote Mr Garland in the Justice Department’s legal complaint, which was released on Thursday.

The White House has reacted to the Texas law taking effect by vowing a “whole-of-government effort” to combat the Texas law and to find ways for women in the state to exercise the right to an abortion, while also calling on Congress’s Democratic majority to codify abortion rights into law, a move that would be highly unlikely of being successful given the stalemate presented by the 50-50 Senate.

“This law is so extreme it does not even allow for exceptions in the case of rape or incest,” Mr Biden noted in his statement about the law last week.

“Complete strangers will now be empowered to inject themselves in the most private and personal health decisions faced by women,” the president continued, adding that “it actually incentivises them to do so with the prospect of $10,000 if they win their case”.

Mr Abbott has defended the law in recent days by vowing to rid Texas of rapists altogether while holding firm to the argument that any woman who wished to have an abortion had six weeks after the point of to do so.