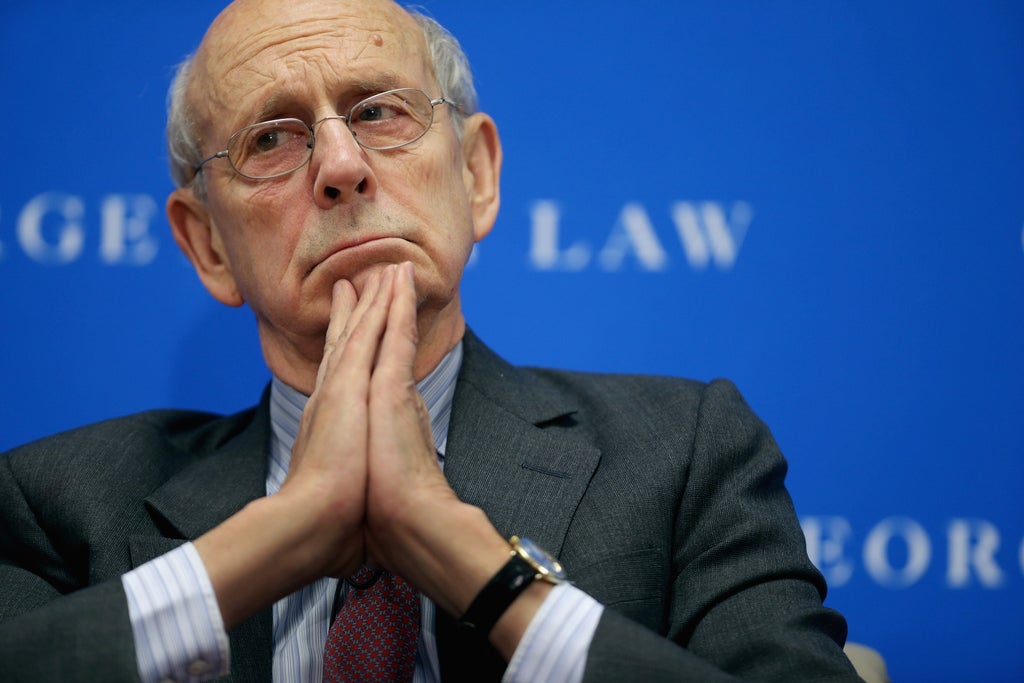 With the US Supreme Court in the last week of its term, many Democrats will be waiting to see whether Justice Stephen Breyer will announce his retirement after nearly three decades on the highest court in the land.

Some liberal groups and progressive lawmakers have been vocal in pushing for Mr Breyer, who was nominated by former President Bill Clinton and sworn in on 3 August 1994, to vacate his seat so that President Joe Biden can name a replacement while their party still holds a narrow majority in Senate.

At 82, Mr Breyer is the oldest member of the Supreme Court and stepping down would allow a younger left-leaning justice to be installed on the court, which currently has just three liberal-leaning justices and six conservative-leaning ones.

What are progressives saying?

Earlier this month, Democratic Rep Alexandria Ocasio-Cortez joined a growing chorus of liberals calling on Mr Breyer to step aside.

“It’s something I think about, but I would probably lean towards ‘yes’ … I’m inclined to say ‘yes’,” Ms Ocasio-Cortez said after being asked on CNN’s State of the Union earlier this month whether she supported calls for Mr Breyer to resign.

Still, the New York representative said she would like to “give more thought” to the matter.

New York Democratic freshman Rep Mondaire Jones was also among the progressives to call on Mr Breyer to step down.

“There’s no question that Justice Breyer, for whom I have great respect, should retire at the end of this term,” he said in April. “My goodness, have we not learned our lesson?”

The “lesson” Mr Jones was likely referring to is the passing of the late justice Ruth Bader Ginsburg, who died in September 2020, just weeks before the November 2020 election.

Many lamented that Ms Ginsburg did not step down during former President Barack Obama’s time in power, so that a new liberal-leaning justice might have been appointed.

Now, with six conservative-leaning justices already on the Supreme Court, Democrats are anxious to at least retain existing liberal-leaning seats.

While some progressives have joined liberal groups in urging Mr Breyer to step down, not all are joining the calls, with Sen Bernie Sanders telling NBC’s Meet The Press: “I’m not going to tell him what to do”.

Asked whether he agrees with calls for Mr Breyer to resign, Mr Sanders said: “I will let the judge make his own decision”.

Will Breyer step down?

So far, Mr Breyer has offered no indication that he plans to step down from his role, despite growing alarm from liberals.

And in a speech delivered in April at a lecture at Harvard Law School, the judge suggested that his loyalty does not lie with any political party.

“My experience of more than 30 years as a judge has shown me that, once men and women take the judicial oath, they take the oath to heart,” he said. “They are loyal to the rule of law, not to the political party that helped to secure their appointment.”

In the speech, which centred around the “peril of politics”, the justice also said that he believed partisanship is damaging to the judiciary.

“If the public sees judges as politicians in robes,” he warned, “its confidence in the courts and in the rule of law itself can only diminish, diminishing the court’s power”.

Still, it is anyone’s guess whether Mr Breyer will resign from his role, with some reading into the meaning of a recent prominent opinion writing for a 7-2 majority’s rejection of a Republican-led challenge against the Affordable Care Act.

Some have suggested that meaning could be found in the fact that Chief Justice John Roberts decided to assign the opinion to Mr Breyer, despite forming part of the majority rejecting the challenge.

“The question we will ask, is he doing this as a gesture to let him have a big swan song in his last year or is he assigning those opinions because he wants to show Justice Breyer, ‘look, you’re still a valued member of this court, stay with us a few years longer’,” CNN legal analyst Jeffrey Toobin said in an exchange on Thursday.

The reality, he acknowledged, is that “both of these are possibilities”.