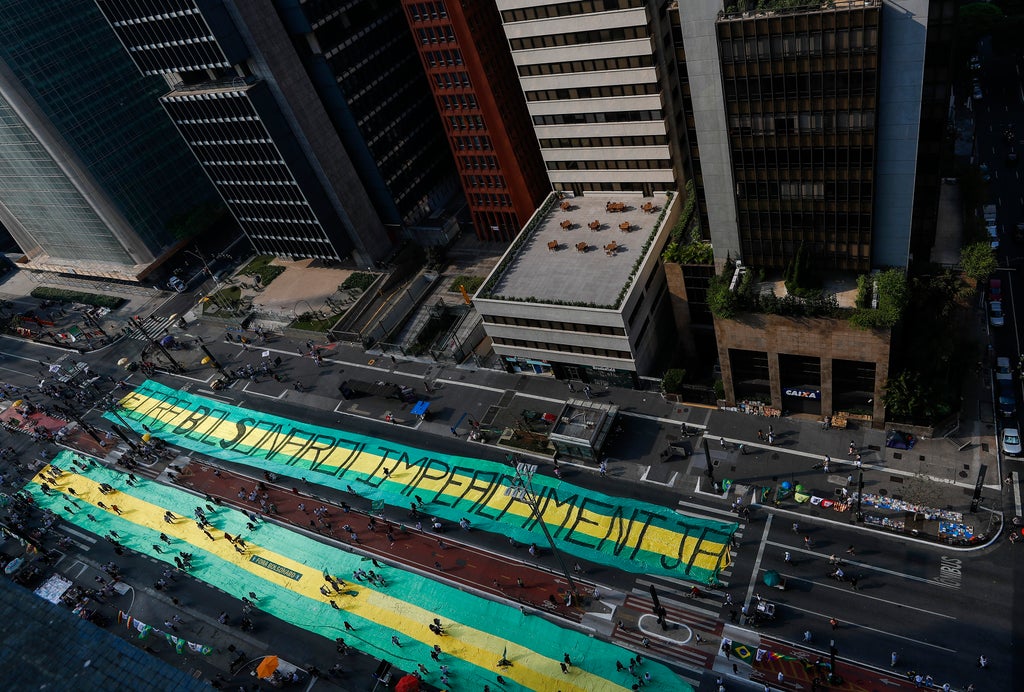 Turnout at protests across Brazil against President Jair Bolsonaro on Sunday was far smaller than rallies the president called earlier this week, underscoring that pressure from the streets remains insufficient to drive efforts seeking his impeachment.

Many of those protesting dressed all in white, as instructed by political groups that organized the demonstrations in at least 19 states. There was a notable absence of leftist political parties, which diminished turnout.

“Bolsonaro is in the middle of a political crisis, but public opinion has so far not exerted pressure on lawmakers from the center for impeachment,” said Leonardo Avritzer, professor of political science at the Federal University of Minas Gerais. “Impeachment can come if lawmakers understand that they begin to run risks of not being elected in 2022 by continuing to support the Brazilian president.”

Sunday’s protest targeted the government for allegedly mishandling the COVID-19 pandemic and surging inflation, particularly for mainstays like food and electricity. But, for some, the demonstration acquired fresh urgency after Sept. 7 rallies at which Bolsonaro stepped up his attacks on the Supreme Court and threatened to plunge the country into a constitutional crisis.

Centrist lawmakers told The Associated Press this week that turnout at Sunday’s demonstrations would be decisive in determining whether to push for impeachment.

The president’s approval ratings have steadily declined throughout the year, but he remains far more popular than prior presidents who were impeached — most recently Dilma Rousseff of the Workers Party in 2016.

Unlike in 2016, people aren’t broadly united behind an alternative or project, said Leonardo Consentino, a professor of political science at Insper, a university in Sao Paulo. In addition, he said many political leaders want to resolve the political crisis with the 2022 elections, when Bolsonaro is expected to seek another term.

As Tuesday’s pro-Bolsonario demonstrations showed, the president is still able to energize his followers. He got a rousing reception from demonstrators in Sao Paulo and the capital, Brasilia, as he lit into the Supreme Court. He declared he will no longer abide by rulings from Justice Alexandre de Moraes, who will assume the presidency of the nation’s electoral tribunal next year. He also said only God can remove him from the presidency.

Many called his comments “undemocratic,” including Supreme Court Chief Justice Luiz Fux, who said that disobeying judicial rulings or encouraging others to do so would constitute an impeachable crime. Bolsonaro later backtracked in a statement claiming his comments were made in the “heat of the moment” and he hadn’t meant to attack other government branches.

Over 130 impeachment requests have been filed since the start of Bolsonaro’s administration, but the lower house’s speaker, Arthur Lira, and his predecessor have declined to open proceedings.

Former President Luiz Inácio Lula da Silva’s Workers Party, one of the parties with greatest capacity to mobilize street protests, didn’t participate in Sunday’s demonstrations. Party president Gleisi Hoffman said it wasn’t invited to join the events, although it supported the cause.

But the party may not want impeachment given that da Silva holds a significant lead in early polls for the 2022 presidential contest, said Consentino, the political science professor.

“Lula is in a comfortable setting to go to an election with Bolsonaro,” Consentino said. “Defeating him would be the best scenario for the Workers Party to return triumphant to the presidency.”