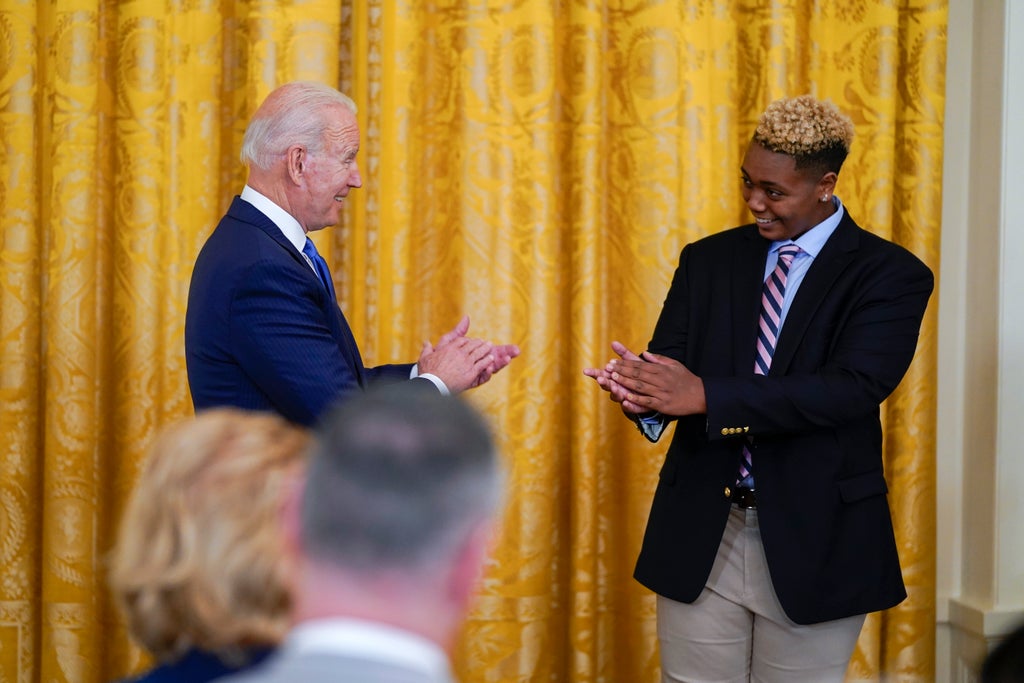 President Joe Biden condemned the wave of anti-LGBT+ legislation filed in states across the US as “some of the ugliest, most un-American laws I’ve seen” as he spoke during a White House event commemorating Pride Month.

“And I’ve been here a while,” he said. “Let’s be clear: This is nothing more than bullying disguised as legislation.”

The president was introduced by 16-year-old Ashton Mota, who is transgender, to mark the return of Pride commemorations at the White House and to urge the US Senate to pass the Equality Act to combat a “disturbing proliferation of anti-LGBT+ bills” advancing in several state legislatures.

“Transgender kids are some of the bravest people in the world,” Mr Biden said on Friday. “It takes courage to be true to your authentic self, and to face discrimination … it takes a toll. These young people aren’t hurting anymore. These laws are hurting them, and it’s got to stop.”

This year, at least 250 bills backed by Republican state lawmakers have sought to exclude LGBT+ discussions in classrooms and ban transgender people from medical care, school sports or bathrooms consistent with their gender, among several other measures. More than a dozen have become law.

The Equality Act, which passed the House of Representatives in February on a mostly party-line vote, would expand federal anti-discrimination laws to ban discrimination on the basis of sex, sexual orientation and gender identity.

It is likely to face overwhelming Republican opposition in an evenly divided Senate that has sought to crush Mr Biden’s agenda through current filibuster rules requiring 60 votes to move legislation forward.

The president has reversed many of Donald Trump’s anti-LGBT+ policies, including overturning a ban on transgender people serving in the military. Mr Biden also has issued an executive order protecting transgender students and threatened sanctions against countries that endanger transgender people.

Before his remarks, the president signed into law a resolution creating a national memorial for victims of the 2016 Pulse nightclub massacre, the deadliest attack on LGBT+ people in US history.

In his remarks at the Pride event, the president recognised that LGBT+ Americans lack “explicit” civil rights protections from discrimination in nearly 30 states, where LGBT+ people can be denied housing, credit and other services and opportunities.

“There are hundreds of thousands of transgender and nonbinary young people like me who are thriving in our country,” Ashton Mota said. “But today in America, the LGBT+ community, especially trans women of colour, continue to face discrimination, homelessness and hate.”

Transportation Secretary Pete Buttigieg, the first openly gay person confirmed to a presidential Cabinet post, noted that “us even being here proves how much change is possible in America.

“So many lives have been changed, saved by the sustained advocacy, the moral resolve, the political courage of countless LGBTQ+ leaders and allies, some elected, some invisible, some long gone, some in this room right now,” he said.

He also pointed to disproportionate rates of violence against transgender Americans, and that legislation denying the existence of transgender people “equates to telling American people that they should not exist.”

State-level legislation equating targeting young transgender people is a “a matter of life and death”, he said.