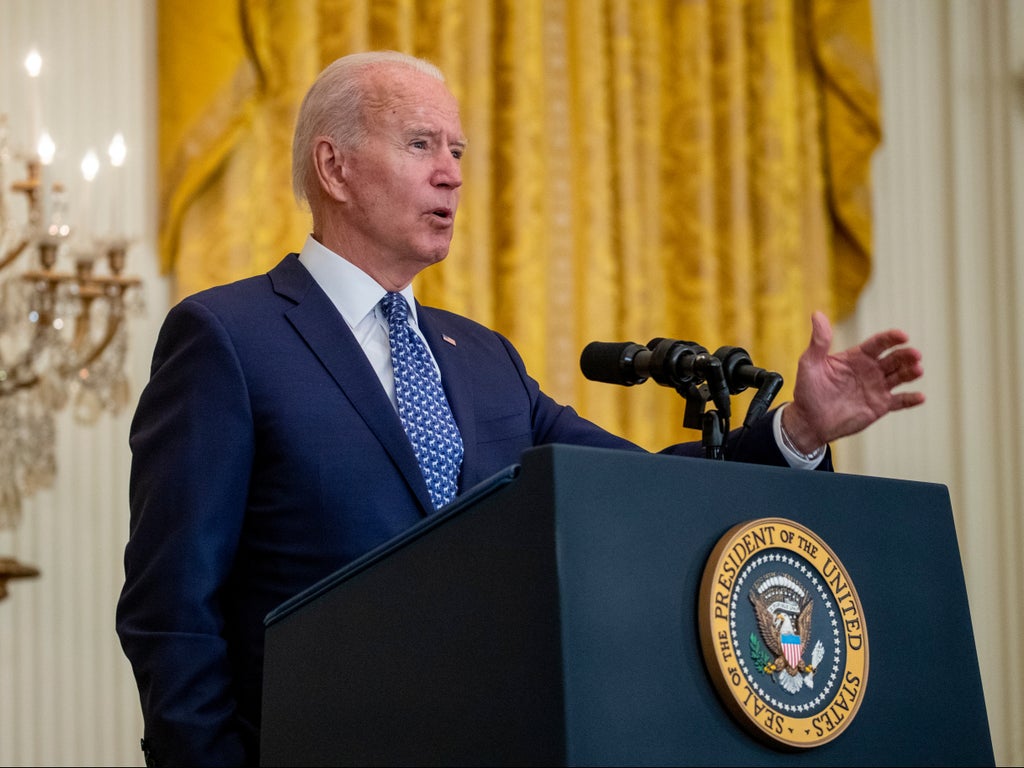 President Joe Biden has unveiled a tougher strategy against Covid-19 centred around a nationwide vaccination mandate for federal and private employers.

Under a White House plan, every employer with 100 employees or more will be required to institute a mandate requiring that unvaccinated workers must either get the vaccine or submit to weekly Covid-19 testing.

His plan also includes a major expansion of federally-backed Covid-19 testing. More than 80 million workers are expected to be affected by the mandate, which Mr Biden noted that many companies, “even Fox News”, are already instituting at their own discretion. The Department of Labour will be directed to instruct employers to give workers paid time off to receive their shots.

“This is a pandemic of the unvaccinated, and it is caused that despite the fact that America has an unprecedented vaccination system … we still have 80 million Americans unwilling to get the shot,” he said.

“Many of us are frustrated with the nearly 80 million Americans who are not vaccinated,” the president continued, adding that the roughly one in four Americans who say they are hesitant to get the Covid-19 vaccine “can cause a lot of damage, and they are”.

“Unvaccinated overcrowd our hospitals … leaving no room for those with a heart attack or cancer,” Mr Biden said.

The president did not mince words with his address. He took direct shots at Republican politicians around the country who he identified as guilty of “actively undermining the fight against Covid-19”, and even took the rare step of criticising private citizens who have chosen so far to remain unvaccinated against the virus: “We’ve been patient, but our patience is wearing thin and the refusal has cost all of us.”

“If these governors won’t help us beat the pandemic, I’ll use my power as president to get them out of the way,” said Mr Biden.

He characterised the country as divided between a silent majority of the vaccinated, eager to return to normalcy after more than a year of Covid-related public health restrictions, and a smaller minority of vocal vaccine sceptics who he said were preventing America’s economy and society at large from overcoming the pandemic.

“We’ve made so much progress in the last seven months of this pandemic,” Mr Biden said. “Even so, we remain at a critical moment, a critical time. We have the tools, now we just have to finish the job with truth, with science, with confidence.

“Here’s the math: the vast majority of Americans are doing the right thing,” charged the president. “Nearly three quarters of the eligible population has gotten at least one shot.”

His plan is likely to run into resistance from local GOP officials, as many Republicans around the country have chafed at the idea that the government at any level has the authority to implement mandates for issues including both vaccines and mask-wearing.

But it’s unlikely he will face significant roadblocks to the plan on Capitol Hill, where his party remains in control of both houses of Congress.

The president concluded the speech on Thursday afternoon without answering questions from reporters, echoing previous instances that have drawn criticism from some in the mainstream press who are frustrated about the inability to question Mr Biden directly about his plans.

The announcement of the US’s strictest measures yet to fight the Covid-19 crisis come as the Delta variant continues to rage across the US, and in particular in areas where vaccination rates remain lower than the national average.

Many hospitals in rural areas and other regions where vaccination rates are lagging have become overwhelmed by new waves of severe Covid-19 cases, with doctors warning that unvaccinated individuals make up nearly all of those admitted to the ICU for coronavirus infections.

Hospital workers and others in care settings will be required to receive the vaccine, with no word on exceptions, under the new White House requirements that also will apply to every federal worker and contractor; those requirements for federal employees and contractors are expected to affect nearly 10 million people.

Other provisions will affect air travel, which has seen a rise in hostile encounters between passengers and flight crew over the past year, as the president warned that the Transportation Security Administration (TSA) was planning to double fines for mask violations.

“If you break the rules, be prepared to pay,” the president warned.

Conservative commentators were crying foul on social media minutes after the speech ended, with many declaring the president’s remarks about governors “tyranny” as unconstitutional.

Republican politicians vowed to fight the national mandates in court.

“My legal team is standing by ready to file our lawsuit the minute @joebiden files his unconstitutional rule. This gross example of federal intrusion will not stand,” tweeted South Dakota governor Kristi Noem.