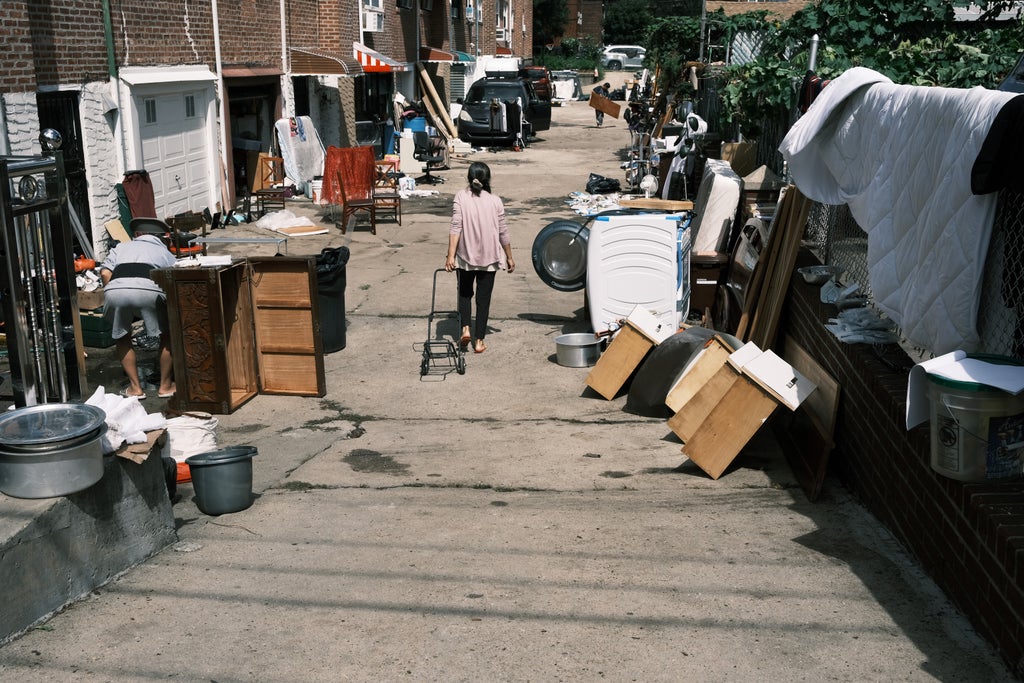 Residents in hard-hit Woodside dried photographs on sidewalks, pumped out standing water and walked alongside lawmakers and FEMA officials as they surveyed damage – collapsed walls, water-logged furniture and piled-up debris in their homes, flooded within minutes as the storm pummelled New York City on 1 September.

“These are the memories that families have,” Senator Schumer told reporters on 6 September. “Those things show the emotional impact, as well as the financial, devastating impact.”

The governors of New York and New Jersey announced on Monday that both states have been granted federal aid through major disaster declarations under Joe Biden’s administration, freeing up FEMA funds for unemployment assistance and for people without insurance coverage to repair their homes, among other measures.

“It’s so incredibly important to acknowledge that what just happened is an immense, catastrophic trauma – psychologically, medically and in terms of what happened to people’s possessions and their homes,” said the New York congresswoman, whose district encompasses Queens and the Bronx.

Federal funding is “going to be an incredibly important step for families, homeowners and renters,” she told reporters.

Mayor de Blasio said city agencies will be going “door to door” to help people sign up for FEMA assistance, and he urged lawmakers to commit to infrastructure spending that addresses the severity of the climate crisis.

“This is what climate change looks like,” he said. “It’s going to take a massive investment both to stop the pain that people are feeling and also what’s happened to our environment, but it’s our only choice.”

Senator Schumer stressed that Congress must pass a bipartisan infrastructure spending bill – which passed the Senate last month – as well as a $3.5 trillion budget proposal that Mr Schumer said contains the “cure” to combat climate disasters rather than merely address the symptoms.

The president also is expected to visit flood-ravaged Queens neighbourhoods on 7 September.

At least 13 people in New York were killed in the floods – most of the victims were immigrants living in illegally constructed lower-level units without legal approval for residential spaces, according to the city’s Department of Buildings.

Five of the six properties where people died in the floods were illegally converted basement and cellar-level apartments. Four of those addresses are in Queens.

Illegal conversions include altering a building into apartments without permits or city approval. Those units often do not include emergency exits, have illegal gas and electrical work and a lack of ventilation and light.

As of this month, the city has collected more than 8,000 complaints this year for suspected illegal apartment conversations. Some estimates put the number of illegal conversions at more than 100,000.

Ida’s destruction – killing 60 people across several states, destroying thousands of homes, and leaving more than 1 million Americans without power – has aggressively underscored proponents’ urgency for Congress to pass a federal budget and infrastructure spending bills that combat climate change and harden infrastructure like drainage, sewer systems and levee protection to withstand more-severe storms, among the “many, many issues we need to start addressing,” Ms Ocasio-Cortez said.

In the immediate aftermath of New York’s floods and during his visit to Louisiana to tour damage in the state, the president linked Ida and its devastation to the climate crisis and called for more federal spending to strengthen power grids, water systems and other infrastructure.

Advocates in Louisiana, New York and New Jersey have also called on officials to act on state and local proposals to curb the impacts of the climate crisis and its collision with growing inequalities in housing and transportation that have made the impacts of climate emergencies more lethal.