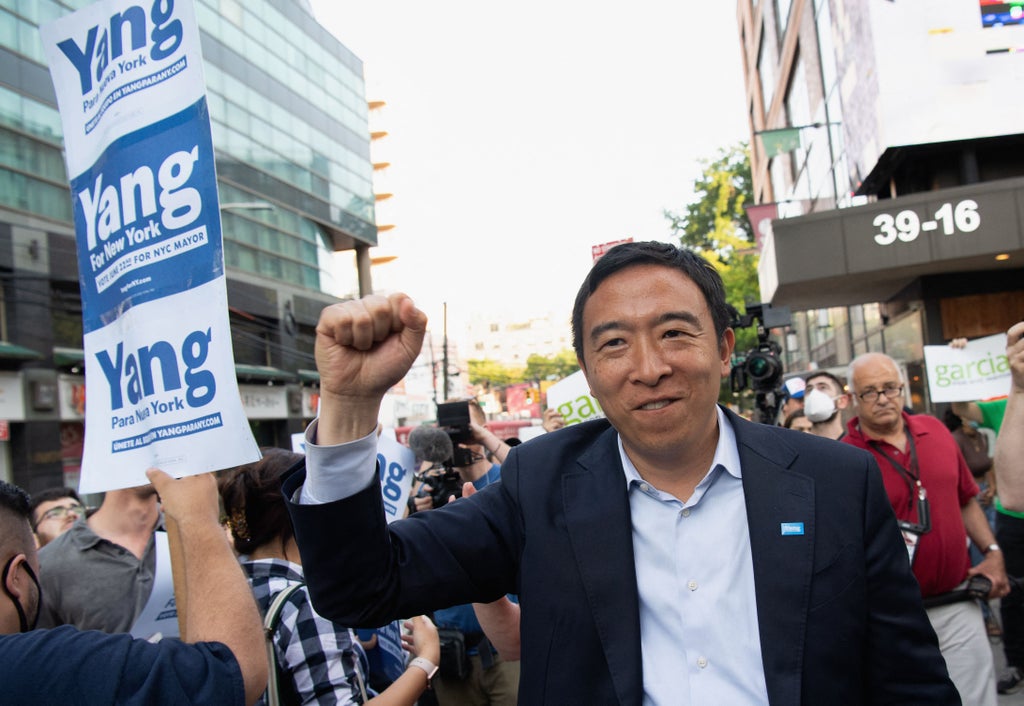 Former presidential and New York mayoral candidate Andrew Yang is going to launch a new political party, according to two individuals close to him.

Mr Yang, a businessman known for championing universal basic income (UBI), will likely announce the new group alongside the release of his forthcoming book, Forward: Notes on the Future of Our Democracy, politico.com/news/2021/09/09/andrew-yang-third-party-511033″>Politico reported on Thursday.

While the former candidate hasn’t publicly discussed any new party, promotional copy associated with the book launch give hints towards its potential platform.

“The machinery of American democracy is failing, Yang argues, and we need bold new ideas to rewire it for twenty-first-century problems,” ads for the book read. “Inspired by his experience running for office and as an entrepreneur, and by ideas drawn from leading thinkers, Yang offers a series of solutions, including data rights, ranked-choice voting, and fact-based governance empowered by modern technology, writing that ‘there is no cavalry’ — it’s up to us.”

The Independent has reached out to Mr Yang for confirmation and comment.

A Yang party would also likely centre around UBI payments. Mr Yang has argued for years that this is a key solution to solving poverty in the US, and his work on the issue has garnered him a national following.

“We need to realize Martin Luther King Jr.’s dream of a guaranteed minimum income and get cash into the hands of people who need it most,” Mr Yang said in a video announcing his mayoral campaign for New York City, which proposed giving between $2,000 and $5,000 to New York’s poorest residents, regardless of immigration or former incarceration status.

Prior to the election, his nonprofit, Humanity Forward, lobbied for stimulus payments as part of the federal Covid relief package, and has announced plans to donate $1 million to working families in the Bronx as well as service workers.

A $1,000-a-month “Freedom Dividend,” was also the major plank of his presidential campaign, which touted the UBI programme as a way to offset job losses from automation.

Despite his quick political rise, Mr Yang’s record as an effective leader has come under scrutiny.

He’s best known for the founding of his nonprofit Venture for America in 2011, a programme which placed entrepreneurs in startups in struggling cities around the country, hoping the experience would eventually empower them to create economic opportunity.

Former President Barack Obama said the effort showed how Mr Yang was a “champion for change.”

The group said its goal was to produce 100,000 jobs; a May analysis by The New York Times suggested Venture for America alumni had only created a few hundred.

Mr Yang has never held elected office, and has had a string of unsuccessful or short-lived business ventures. He created a website called Stargiving that tried to arrange for people to spend time with celebrities as a way to encourage charitable giving, which he himself acknowledged “failed spectacularly” in one of his books. He also created a company called Ignition NYC that hosted networking parties for young professionals, which ceased after about a dozen events.