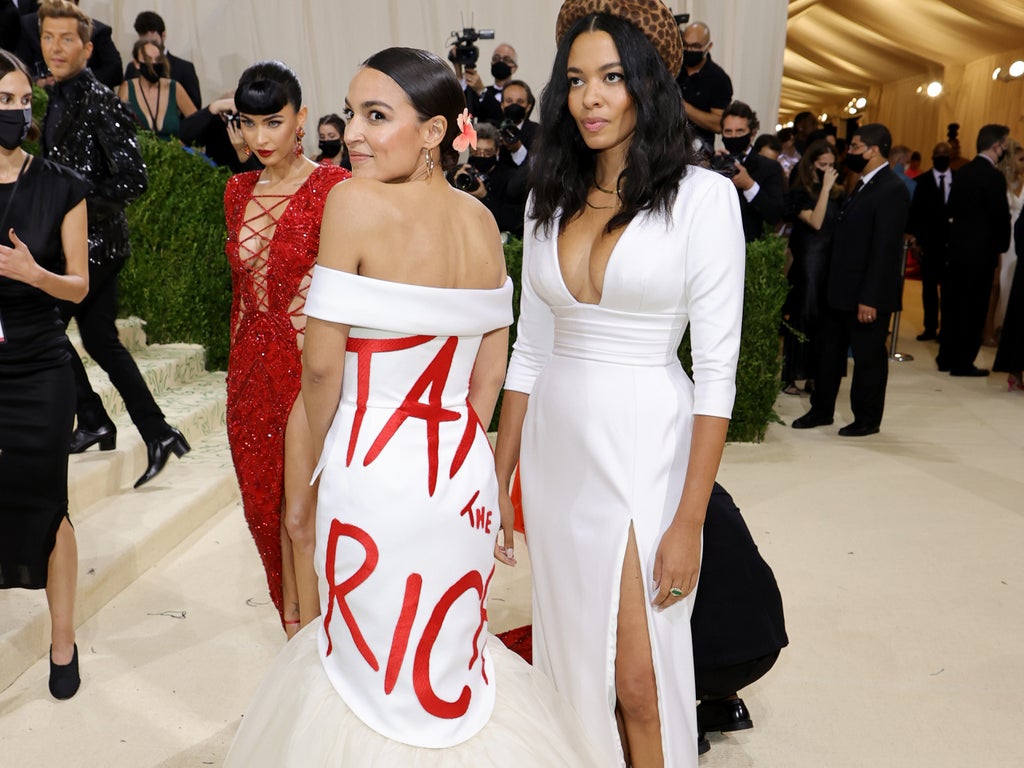 Ms Ocasio Cortez wore a white off-the-shoulder gown with ‘Tax the Rich’ emblazoned on the back in red.

The dress was designed by Aurora James of Brother Vellis, who founded the 15% Pledge – which calls on retailers to dedicate 15 per cent of their store space to Black designers.

The gown, though one of many bold outfits seen at what is dubbed ‘fashion’s biggest night out’, prompted a backlash from some on the right, who blasted Ms Ocasio Cortez for criticising wealth while attending the £35,000-a-head event.

Those critics were missing the point, Gabriel Ocasion Cortez said.

“She went with no intention to rub elbows, which is why every other politician goes,” he wrote on Instagram in response to those hitting out at his sister.

“She wore a statement dress about the ultra-rich not paying their fair share right in front of their faces.

“Would you prefer she try to wear the same dress outside McDonald’s in an attempt to solicit the same response? Genuinely curious,” he added.

As Mr Ocasio Cortez pointed out in a series of posts, his sister’s outfit “fits the bill”.

The theme for the Gala was “In America: A Lexicon of Fashion”. He wrote: “Aurora James, stylish owner of Brother Vellies,” alongside bullet points: “American brand; Brooklyn based; Black, woman owned; sustainability based.”

“An American brand at the America-themed Mat gala … it fits the bill.”

He added: “‘Y’all love to talk shit about someone who walks the walk

“I think it’s very interesting how many ‘leftists’ are saying ‘how could she go somewhere so expensive?!’ as if she paid for it herself or with public dollars.

“Meanwhile, y’all are the same heaux that cry out ‘republicans always stick together, we need to copy that energy.

“Even if it’s not your cup of tea when it comes to political messaging, sitting in your unwashed sheets with your d*** in your hand commenting ‘healthcare plz’ is f****** lame.

Among those who lashed out at the gown was Republican congresswoman Marjorie Taylor Greene, who didn’t name her colleague but instead shared pictures of Joy Villa, who wore dresses featuring Trump messaging to two previous Met Galas.

“You were first,” Ms Greene tweeted about Ms Villa, attaching images of her “Make America Great Again” and “Build the wall” dresses. “And gorgeous! Perfect embodiment of an American woman who loves her country and America first!” she added.